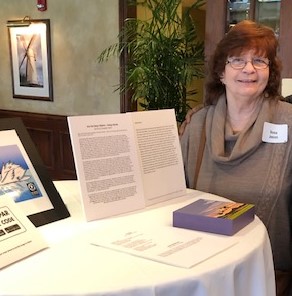 Sooz Elizabeth is a co-founder of, and regular contributor to, The Healing Voices Magazine, and she is a charter member of Spirit Fire. She has advised, helped develop, and attended Spirit Fire events and serves on the Spirit Fire advisory counsel. Sooz is a survivor of abuse within the Church and remains an active Catholic.

Reflecting on her own path of healing, Sooz recounts a quote from Pope Francis: “…we are more than our wounds; our wounds have created in us gifts…” Before her work founding The Healing Voices Magazine in 2015, Sooz explains she would never have connected these words of Pope Francis to herself, but now, she embraces these words as an image of herself. Sooz attributes this transformation to Tom Tharayil, the VAC in Chicago who is renowned for his generous and pastoral care for survivors of clergy abuse. It was Tom who later introduced a group of survivors, and they became a group inspired to launch an online magazine, offering online friendship, prayer services, and information exchanges. That evolved into The Healing Voices Magazine, written and edited by survivors, with contributors from inside and beyond the Church to exchange reflections on the experience of the pain of abuse and the impact of grace and faith on healing.

Sooz is a devoted Catholic, a proud and loving mom, a retired teacher from public schools, and currently a frequent substitute teacher for two Catholic Schools.

She began writing at a young age. Writing became a tool to release the pain that she felt inside without having to speak the words or focus on the details. Writing also served a controllable-managed outlet to own the affects caused by years of abuse by several trusted people. This practice of writing the words imbued with the feelings she could not speak grew over the years and evolved into her many poem-prayers and prayer-poems. Sooz recalls feeling that this practice not only allowed for a release of pain but also that she was giving a chance to God, letting him in on something He may not know. She trusted God would be able to read between the lines and certain that He felt her pain.

Later, once in retirement, Sooz was introduced to the book Shattered Soul? by Pat and Sue Lauber-Fleming & Vicki Schmidt, which was used by a Victim Assistance Coordinator in offering guidance and direction to survivors. Sooz attributes her experience of working through this book with the Victim Assistance Coordinator for finding a new sense of courage and commitment to let healing grow. She began to realize that her recovery was no longer important just for her but also important to share with anyone who suffered from clergy abuse. Indeed, Sooz has since worked directly with the authors to launch a workshop based on the book and conducted in a manner aligned with Spirit Fire guidelines and trauma-informed principles, first piloted recently.

Sooz aligns the birth of this workshop to the words by Pope Francis: “…we are more than our wounds; our wounds have created in us gifts…” Her prayer remains: “By the Grace of God, I prayer this book and this Workshop offer other survivors and our Church, healing.”

Quotations with special meaning for her which she would like to share are from St. Teresa of Calcutta:

The Scripture with which Sooz would like to close her biography:

Rejoice in hope, be patient in tribulation, be constant in prayer. Romans 12:12